Congratulations on surviving your respective Mondays! After an action-packed weekend, I’m soothing my soul with home cooking and a rerun of The Notebook on Lifetime. Yes, yes, I’m a giant cliché 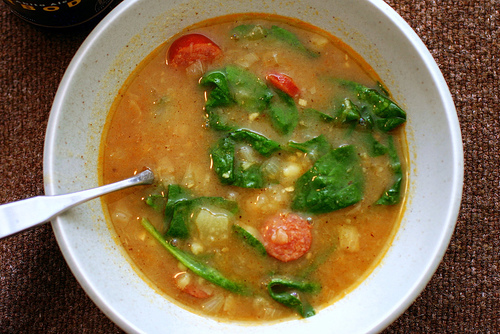 Now, while Fall doesn’t seem to have reached the beautiful Bay Area as of yet, I wanted to share one of my favorite comfort food recipes with you today for Blogtober! I made this for the first time two years ago after coming across it on the fabulous Deb’s website: Smitten Kitchen. I can’t wait for it to cool down enough so I can make it again! It’s one of those hearty, potato-based soups, and while it feels incredibly indulgent, its primary base is simply chicken broth and a whole ‘lotta sweet potato. Healthy and full of flavor!

I amended it a bit because I had a hard time coming across fresh chorizo, so I used Trader Joe’s chicken andouille sausage instead, which also packs quite a punch. I also like that it’s a one-pot meal, so clean up is really minimal.

According to the recipe, you’ll need:

If you prefer a creamier soup, I’ve been tempted to stir in a spoonful or two of sour cream, which I think compliments the spiciness nicely. The Afghan in me can mix yogurt or sour cream into pretty much everything. I’m always looking to expand my repertoire- what are some of your go-to Fall recipes? If you’re on the lookout, I can’t recommend Smitten Kitchen enough. It’s a wealth of amazing recipes, complete with beautiful photos. I have yet to come across one that I don’t like.