Today, I wanted to write about a little phenomenon I’ve encountered. I’m not sure if I’m entirely abnormal, but I find that, having grown up multilingual, I no longer entirely trust myself to switch from language to language accurately. They all seem to blend together, and I constantly want to substitute one language with another in the same sentence. Even when I reach a certain level of comfort, I second guess myself. During my last trip to Austria, I discovered a bit of a solution.

You see, I just need a few drinks and then my German comes out just fine. In moments of uncertainty, I don’t have a problem asking for help if there’s a word I can’t remember or simply don’t know. The not knowing is always inevitable. I mean, when you’re learning a language, who the hell covers things like “Help! The fuse blew in the basement”? 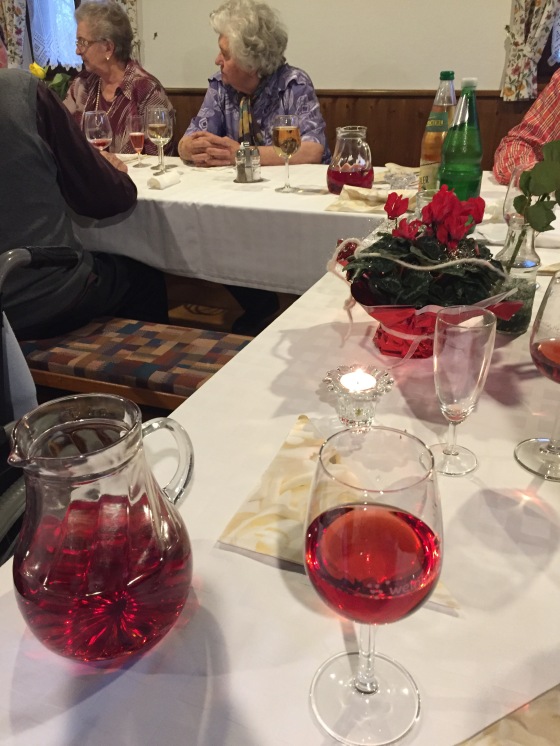 Sans drinks, I have a crippling fear of speaking to people like a cave woman, and by this I mean using improper grammar or inadvertently offending someone. The fully sober me will get ready to concoct a sentence, and then the voice in my head yells “THAT’S NOT GRAMMATICALLY CORRECT! Everyone in this country thinks you’re an idiot!” So I’m forced to limit my speech to disjointed sentences or one word answers. “Yes. The food is delicious. No, I’m not at all cold.” It’s quite telling that the one phrase I find myself repeating over and over in a variety of languages is “No, really, I’m full.” This can probably be attributed to the fact that I come from a group of  universally stocky people, who I’m sure secretly harbor the thought that I’m a strange human twig who’s slowly and deliberately starving themselves into nothing. No matter how much food I shovel in, they insist I need to eat more. On my European side of the family this philosophy unfortunately (or fortunately) also applies to alcohol. I can’t honestly think of another family where “You have to finish the whole bottle!” Is an acceptable thing to say to one person…on a Tuesday evening. There’s also half a cake you’re going to have to put away if you want to make it out alive. Try not to fall down on your way out to the car. Given that there are no  streetlights and a lot of ditches you can fall into, this makes this normal task about 800 times trickier.

One evening, after describing what an avocado was to my grandmother for a short period of time, I finally figured out that the German word for avocado was “avocado,” but with a German accent. I’m considering the 10 minutes of my life that I spent performing some sort of weird German charades a total waste. I wrangled all of my vocabulary together to attempt to relay the message: “No, it’s not a fruit, it the other thing… It’s soft, and green, and has a big seed thing in the middle. They put it in sushi!!” (Because sushi is a great reference point for people who have lived in the Austrian countryside their whole lives and still slaughter pigs in their yard.) This was all followed by me making the shape of an avocado repeatedly in the air, like it was going to help. Granted when you’re have two beers and fours glasses of wine in you, it seems really effective.

Despite having spoken it for the better part of my life, I still find that German is not an easy language. But, sometimes, things are a lot simpler than they seem. A bit of liquid courage can help and not being afraid to fail is always a good start.

There was an error retrieving images from Instagram. An attempt will be remade in a few minutes.